Boulder City Sunrise Rotary is in our 24th year, is 60 members strong, and as “Service Above Self” Rotarians, our weekly meetings host quality speakers, enthusiastic and involved members, and are fun filled while being informative.

We are committed to a wide range of individuals, organizations and activities in our community: from our youth to our senior citizens, people from all walks of life and for those less fortunate. Our support includes civic, education and athletics, with projects to support them all.

Our goal is to enlarge our outreach which is funded and carried out by Rotarians to enhance the quality of life in our community.

While these businessmen and professionals were searching for a permanent location, they met in such places as The Hacienda Hotel & Casino, The Boulder Dam Hotel, Two Gals Restaurant and later at the beautiful Boulder Creek Golf Club. At one point they brought McDonalds Egg McMuffins and hot coffee to be served at picnic tables in the park! 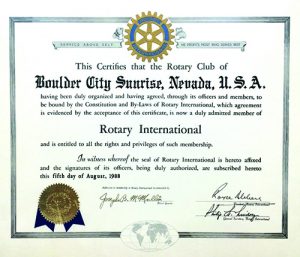 During the charter year, the club boasted 32 members of which 7 were women. Some of the members still active in our club that joined during that charter year are Bob Blair and Bob Sears. Peggy Leavitt was the first BCSR woman president, during 1991-1992.

In 1992, the first All Night drug and alcohol free Graduation Party was held to keep Boulder City High School graduating seniors safe on this most important night. The budget was $1,600. Today’s budget is approximately $30,000. The evening is filled with food and fun events at different venues around the valley, all kept as a surprise until the event. Nearing daylight a drawing is held with several graduates winning large cash prizes.

Our annual Würst Festival is the means to fund our annual contributions to the community as well as projects such as the Graduation Party. This day of family fun is held the last weekend in September. Rotarians grill brats, serve beer and host a wine pavilion. Live and silent auctions are held, hundreds of cars are on display at the car show, and there is lots of musical entertainment.

Today’s 60 plus member club has become a major contributor to the well being of the entire community. However, social activities and events allow Rotarians a chance to let loose and have fun together. Boulder City Sunrise Rotary hosts parties and activities that offer diversions from today’s demanding schedules. Boulder City Sunrise Rotary is part of district 5300 which has approximately 60 clubs located in Southern Nevada and California.

Our Alcohol and Drug Free ~ “All Night Graduation Party”

Sunrise Rotary sponsors this fun filled evening for Boulder City High School graduates to keep them safe on this special night of their lives.

This takes a lot of manpower and is a costly event; however, it is Sunrise Rotary’s most rewarding project.

Smoke from the Sunrise Rotary Grill fills the air annually the last Saturday in September for this valley wide event. Würst Festival hosts live and silent auctions, brats and beer, live entertainment and a car show.

Funds raised support the larger part of our giving back to the community. 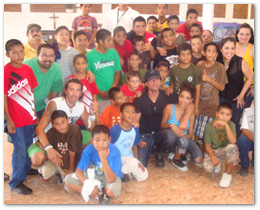 We will be continuing the International Projects in Cabo San Lucas, Mexico. The projects started by our president in 2005-2006 are: 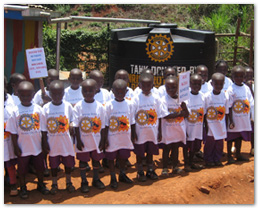 We have enabled them to purchase a 10,000 liter water storage tank and a rain catching system.

Since that time, the school has added several classrooms that are on the opposite side of the original system and not in reach of the water tank. Additionally, they have found that a lot of water that could have been collected overflows the tank and is wasted. We will continue our support this year with funding for a rain catching system. 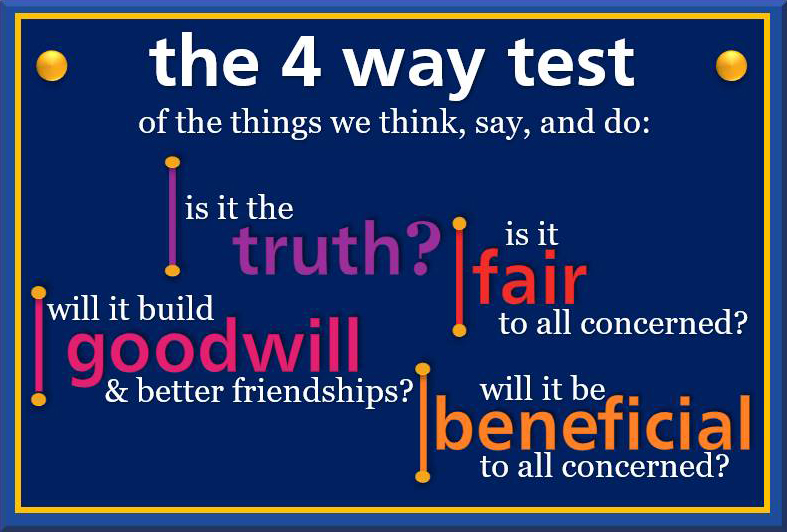